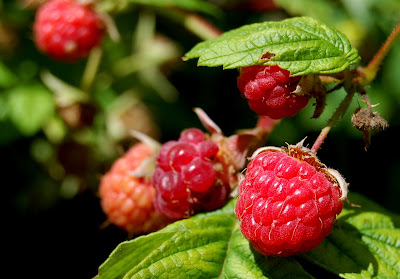 It's mid July in Toronto and the summer has so far been cool with lots of clouds but not too much rainfall. Many crops have been delayed by a week or so and the quality is below normal. Our local strawberries were very limited in both quality and quantity causing the price to double from last year. Not good when competing with industrial berries from California. 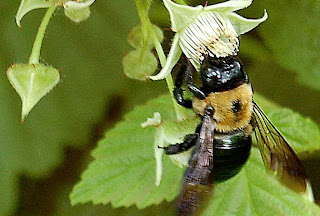 My backyard has been producing relatively well. The raspberries have been providing about a pint of fruit every second day for the last week. Made a fantastic raspberry-nectarine milk shake last night!

The cherry tree did much better than last year when we only had 1 cherry. This year many rotted before maturing and quite a few had little wormy maggots inside (you could tell before eating by checking for little holes in the cherry skin). Much of the harvest was too high for us to reach but we ate what we could direct from the tree.


New for me this year are tomatillos. 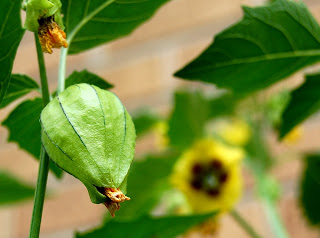 I've been growing them in pots and have been surprised at their vigor. Lots of fruit developing. Now I need to search out some traditional salsa recipes to use these beauties. 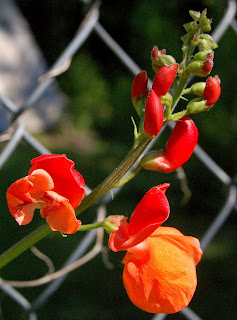 My Scarlet Runner beans (grown from beans that I saved from last year) had a rough start, with all initial leaves being eaten as soon as they emerged from the soil. My guesses are slug and snails combined with a cool start to the summer. Some seedling survived, but I also planted a whole bunch more to compensate for the loss. The second crop came up in half the time and more vigorous, most likely because the soil was warmer. The best of them has now climbed the fence to about 6ft in height. No flowers yet, but probably next week. I had such a good harvest last year that many of my scarlet runner beans are growing in friends backyards this year. Everyone enjoys watching how fast they climb once they get established. I enjoy watching the hummingbirds that the flowers attract almost as much as eating the fresh green beans. 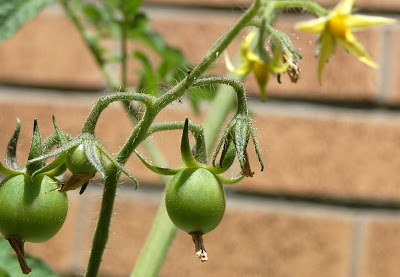 Tomatoes are doing well with many fruit developing. There was an earlier infestation of aphids, but recently I'm seeing ladybugs enjoying the bonanza of food. Since we'd been warned of low populations of ladybugs this year, I'm happy to see them on my plants. 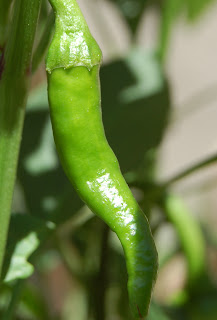 Peppers are flowering and fruiting abundantly, but really need some hot weather to mature them.

The rest of the herbs are all progressing well. Basil was slow to start but has taken off over the last week or so. The mint has been aggressive as usual.

And my cats are really enjoying the fresh catnip that has managed to re-seed itself from last year.
backyard fruit homegrown vegetables

Unknown said…
Your garden sounds like mine. I think we're in the same neighbourhood. M3H 2K7. About 60% of our cherries were rotten too. My blueberries started to ripen about a week ago. I think I might head up north to get some real wild ones.
Mon Jul 20, 09:26:00 PM EDT

Yes - nice garden. I too have a pepper plant very similar to that: http://topsintoronto.blogspot.com/2009/07/my-garden.html

Clearly the powder I needed for my nose was cocaine or some kind of drug-related substance.

Since I haven't had enough time recently to create content rich blogs with deep insights, I've decided to post what I call 'bleets' . They are basically 'blog tweets' . Short comments about links that I found to have interesting content. Pretty much a back to the future approach to blogging. Most will have a food connection of some kind or other. So here's my first bleet : Wolf and Pig A unique animation style from Japan. Fun to watch! This is an authentic Bleet from the Rastalam.

Disaffected users of Chow are attempting to create a new, user centric, food forum for Toronto. Ontario, and beyond. The forum is almost ready for beta testing, but needs a domain name. Many have been suggested. The most popular name so far (chowfound) has been eliminated due to legal reasons. I've updated this poll to include the other names that had gained votes in the initial poll, plus a few newly suggested ones. This is a much shorter list. Please pick one, or add your own. One vote per person. Brand new poll. Please vote again! Choose Your Favourite Domain Name for our New Forum (v2) ( survey ) OTHER SUGGESTIONS: chewsy 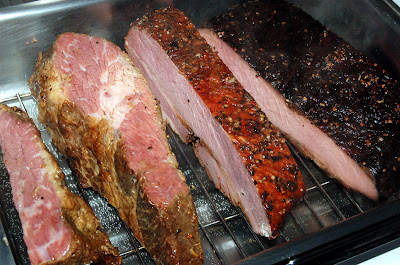 Seven Briskets & Seven Tasters We wanted to find out how local smoked meat/pastrami compared without being influenced by any advance knowledge of product identity. In other words, this was a single blind taste test. Only the host knew what was being served. The host was not allowed to participate in the judging or identify any of the samples until all the scores were in. All the meats were purchased unsliced. They were steamed and hand cut just before serving (Note that Goldin's had to be cooked in its plastic packaging before serving. ) Meat samples were tasted without bread or any condiments (although we had sandwiches later after the official tasting featuring fresh rye bread from Bagel Plus and homemade creamy hot horseradish mustard from Cottage Chef ). OUR MEAT SAMPLES CAME FROM: Centre Street Deli $30 kg (Old Fashioned) Wolfies $24 kg Caplansky's $29 kg Stockyards $33 kg Cottage Chef $30 kg Dunn's $12 kg (a Montreal product purchased from Ajax COST